Thousands of people gathered today to pay their final respects to Muhammad Ali, as a jovial funeral procession, highlighted by fans who chanted and threw flowers, gave way to a more somber memorial service in Louisville, Kentucky.
Ali’s memorial service at the KFC Yum! Center started at 3 p.m., an hour after it was originally scheduled.
In a eulogy, President Bill Clinton said he wept “like a baby” while watching Ali take the final steps to light the Olympic cauldron in 1996 in Atlanta, during his presidency. He also recalled a time when he caught Ali holding two fingers behind his head to form the shape of bunny ears.
“I was trying to be dignified,” Clinton said.
Clinton said in Ali’s lifetime, he refused to be a victim and never wasted a day feeling sorry for himself after he was diagnosed with Parkinson’s disease.
Ali’s wife, Lonnie Ali, told a story about a white Louisville police officer who helped a 12-year-old Cassius Clay when his bike was stolen, crediting him with “handing” Muhammad Ali a future in boxing.
“America must never forget when a cop and an inner city [kid] talk to each other, then miracles can happen,” Lonnie said, receiving a standing ovation from the crowd.
Billy Crystal talked about the first time he met Ali in 1974, when he was just getting his career in stand-up comedy started. After the show, in which he imitated the boxer, Ali approached him and gave him a “big hug,” Crystal said.
“You’re my little brother,” Crystal said the boxer told him. And Ali called him “little brother” from then on.
Attallah Shabazz, Malcom X’s eldest daughter read the names of Ali’s nine children, calling her relationship with Ali “treasured” due to his kinship with her father.
“Religions have different names, and yet they all contain truth, Shabazz said. “Truth expressed in different ways and forms and times. It doesn’t matter whether you’re a Muslim, a Christian or a Jew. When you believe in God, you should believe all people are part of one family.”
Senior adviser to the president, Valerie Jarrett, spoke on behalf of President Obama and First Lady Michelle Obama, who expressed their deepest regrets that they could not attend.
He was “not just a Muslim, or a black man, or a Louisville kid,” Jarrett said. “He wasn’t even just the greatest of all time. He was Muhammad Ali. The whole is far greater than the sum of its parts.”
Utah Sen. Orrin Hatch spoke early on, reminiscing about Ali’s 1964 fight against Sonny Liston when he yelled to a crowded pack of reporters, “I’m the greatest!”
“He wrote his own title in the textbooks,” Hatch said.
Hatch also spoke of his close friendship with Ali and his wife, Lonnie, calling her “one of the great women of this world.” 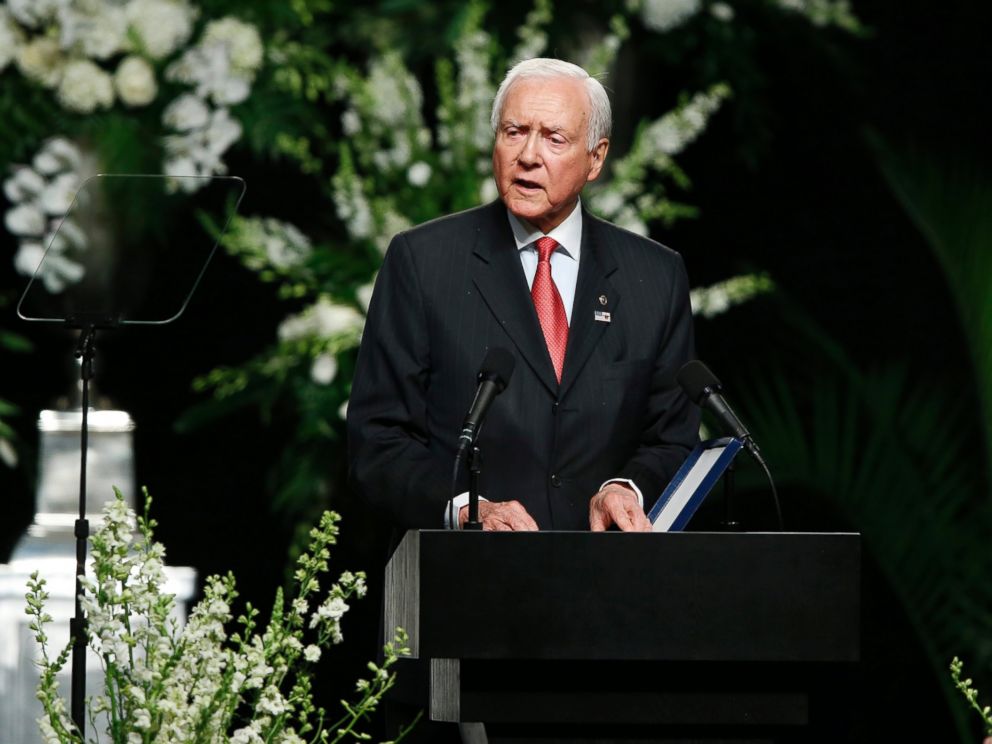 Erik S. Lesser/EPA
Senator Orrin Hatch speaks during the Muhammad Ali funeral service in Louisville, Kentucky, June 10, 2016.more +
Meanwhile, Rabbi Michael Lerner said the way to honor Ali is to speak out and “refuse to follow the path of conformity.”
“Tell the politicians who use violence worldwide and then preach nonviolence to the oppressed, that it’s time to end their drone warfare and every other form of warfare,” Lerner said. “… Tell leaders in Turkey to stop killing the Kurds.” 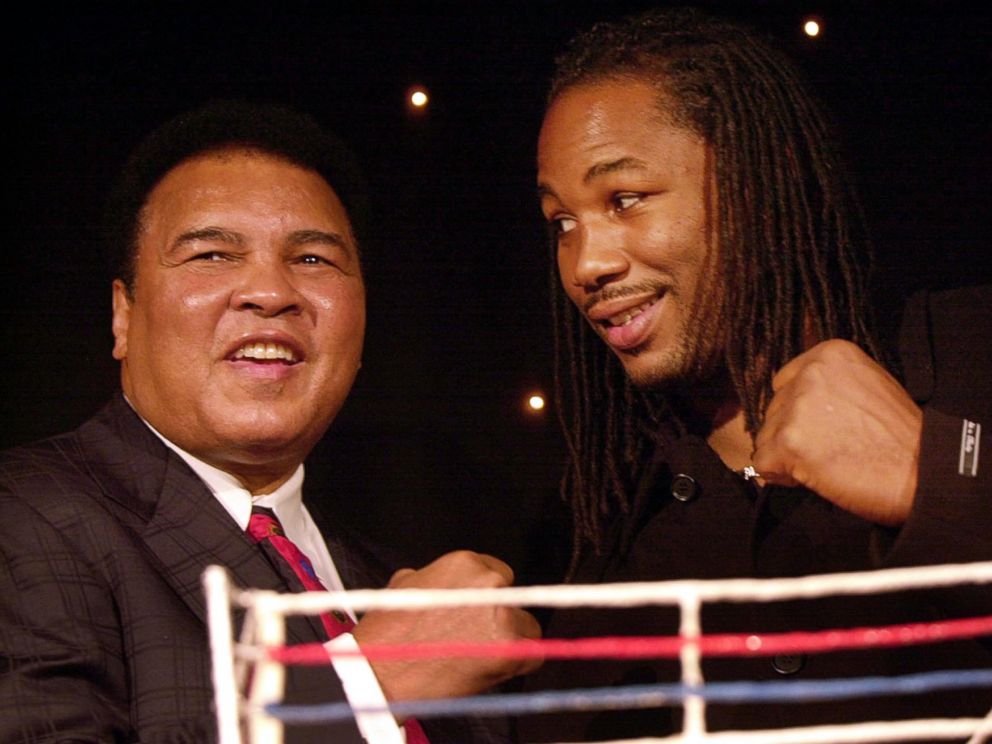 PA Wire via AP
Former Heavyweight Champion Muhammad Ali joins then Heavyweight Champion Lennox Lewis at an event in London, Jan. 15, 2001.more +
Journalist Bryant Gumbel gave a eulogy as well. The service was open to the public.
Poetry was read by Attallah Shabazz, Malcolm X‘s eldest daughter, while Valerie Jarrett, a senior adviser to President Obama, gave a statement. Other guests of note included Turkish President Recep Tayyip Erdogan andKing Abdullah II of Jordan.
The service was led by an imam and included clerics from multiple religions. After the service, a private reception for friends and guests was scheduled at the Muhammad Ali Center in Louisville. 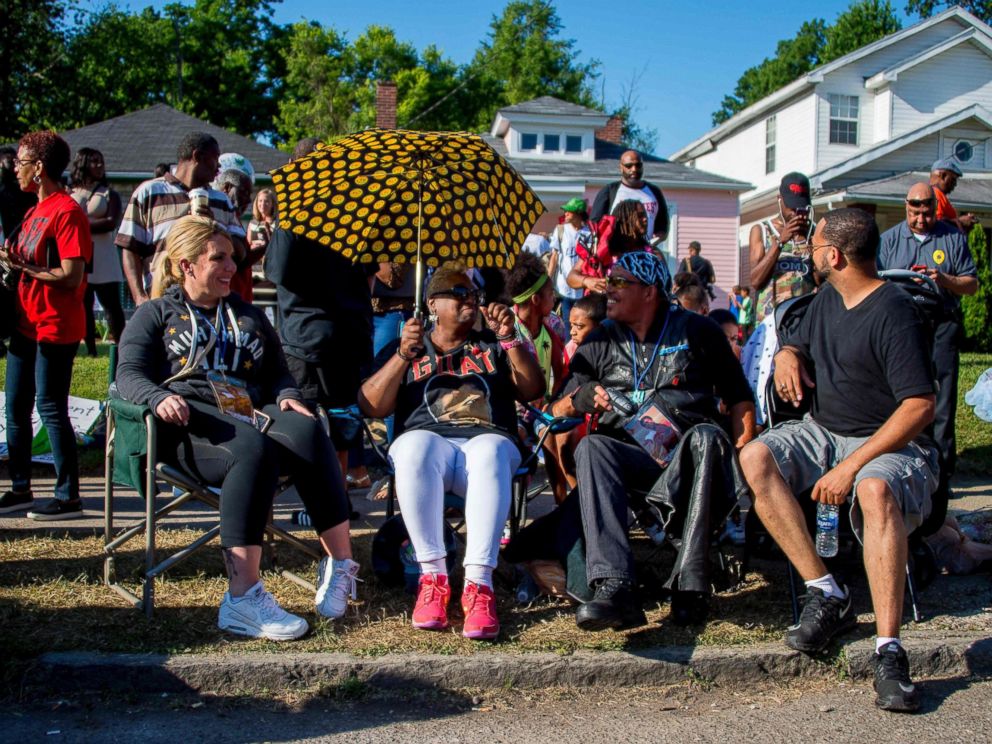 Jim Watson/AFP/Getty Images
People sit on lawn chairs outside boxing legend Muhammad Ali’s childhood home while waiting to pay their respects during a funeral procession on June 10, 2016 in Louisville, Kentucky.more +
Earlier today, Ali’s family, friends and fans mingled under a clear, sunny sky, celebrating both Ali’s career as an athlete and his status as a civil rights icon. Flowers and wreaths were laid at the site of his childhood home and spectators threw so many red, yellow, and white flowers onto the hearse that the driver was forced to periodically switch on the windshield wipers in order to see the road.

Brian Smialowski/AFP/Getty Images
A woman places flower petals along the entrance to Cave Hill Cemetery for the funeral procession for boxing legend Muhammad Ali on June 10, 2016 in Louisville, Kentucky.more + 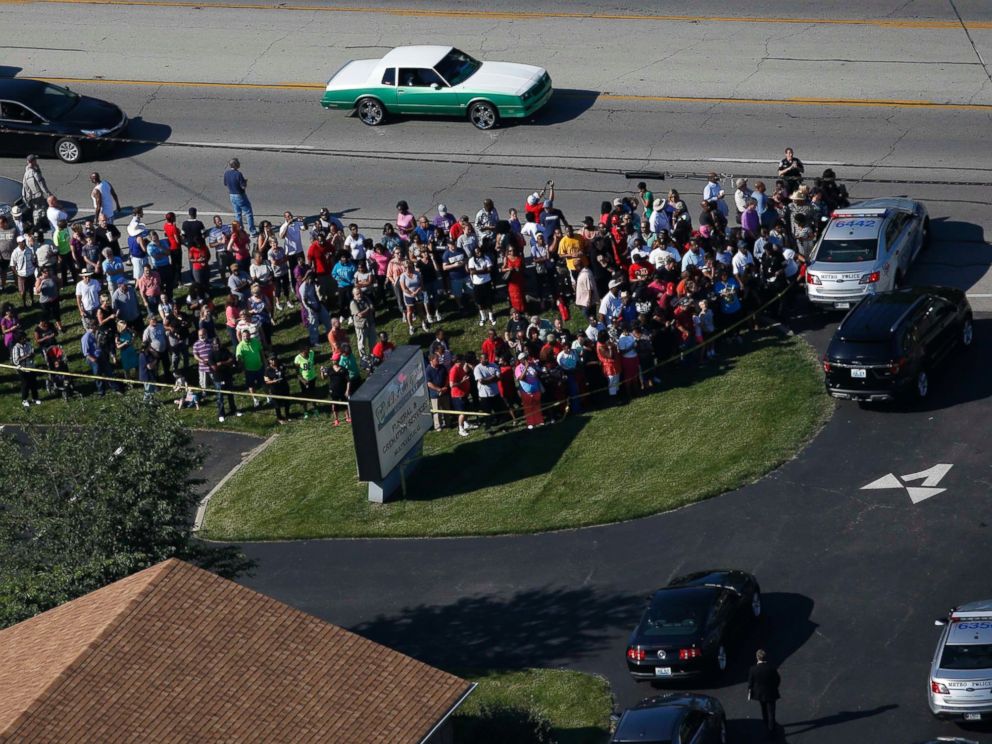 Lucy Nicholson/Reuters
A crowd gathers outside the A.D. Porter and Sons Funeral Home for the procession to begin for three-time heavyweight boxing champion Muhammad Ali in Louisville, Kentucky, June 10, 2016.more +
Ali’s cherry-red casket was draped in an Islamic shroud. Will Smith, who portrayed the boxing legend in the movie “Ali,” along with former heavyweight champions Lennox Lewis and Mike Tyson and three family members, served as pallbearers. 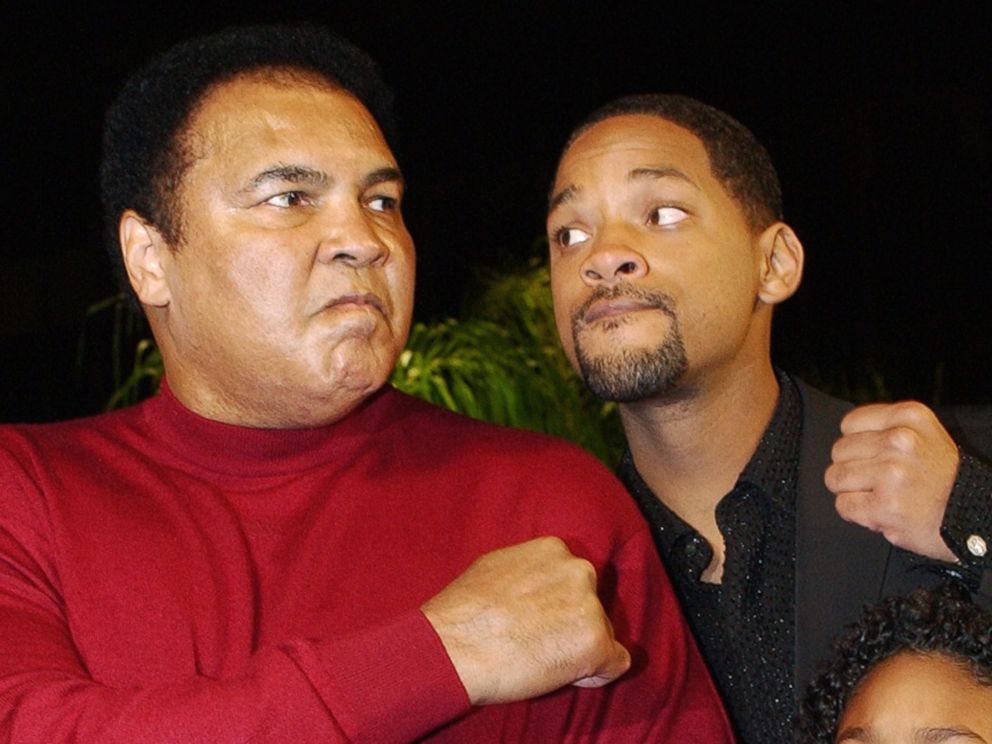 Rene Macura/AP Photo
Muhammad Ali and Will Smith pose at the premiere of the film “Ali,” in Los Angeles, Dec. 12, 2001.more + 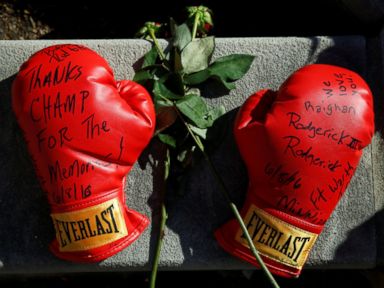