Matchday 36 produced stunning results, as Plateau United closed in further on their first ever Nigeria Professional Football League (NPFL) trophy, despite sharing the spoils at home against Rivers United.
MFM FC again fluffed the opportunity to extend the title fight to the end when they succumbed to Abia Warriors in Umuahia thus extending their poor away form.
But it was the defending champions, Rangers that put up a spirited performance to stay up in the top flight with a crucial win in Sagamu against already relegated Remo Stars. Then, the battle to beat the drop got more interesting, as Niger Tornadoes and FC Ifeanyiubah are billed to complete second half of their fixture on Monday in Lokoja after the game was rained out.
Akwa United and Lobi Stars kicked off proceedings for the matchday at the Uyo Township Stadium on Friday. Musa Newman and Gabriel Okechukwu got the goals for the Promise Keepers, as Kingsley Eduwo’s consolation goal could not turn around events in Uyo.
That result and Enyimba’s resounding win against struggling Wikki Tourists also leaves the fight for third place a pundit’s nightmare.
The league title was tipped by bookmakers to be in for a logical conclusion, when visiting Rivers United filed out against Plateau United that needed a win, with possible MFM slip to clinch the trophy.
Fans at the Rwang Pam Stadium got stunned, when Emeka Ogbugh turned in Zoumana Doumbia’s cross to put the Rivers side ahead.
Plateau United’s Emma James missed a penalty nine minutes from time, but Peter Eneji had better ideas as he drew the Jos side level on 89 minutes, with a stunning 25-yard strike.
At the Pantanmi Stadium, Gombe United edged ABS 2-1 in a tightly contested game. It was Wonder Goal winner, Musa Usman that put the home side in front in the 15th minute, before Wasiu Alalade brought the visitors level seven minutes before the break. Usman bagged his brace just after the hour mark.
Katsina United brightened their chances of beating the drop with a comfortable 2-0 win at home to visiting Sunshine Stars. Chinedu Udechukwu scored both goals for the home side.
Enyimba closed in on third-placed Akwa United with a convincing 4-0 win over Wikki Tourists of Bauchi at the UJ Esuene Stadium. Ikechukwu Igbenegbu got the seven-time champions in front in the 9th minute from the spot. Stephen Chukwude, Stanley Dimgba and Chinonso Okonkwo got the other goals for the People Elephant.
Arinze Nwangwu got the only goal at the Umuahia Township Stadium, as Abia Warriors edged second-placed MFM 1-0. The result has further put a dent on MFM’s hopes of toppling Plateau United to the trophy with two matches to wrap up the campaign.
In Sagamu, champions Rangers secured their place in the top flight with a hard fought 2-1 win against relegated Remo Stars.
At the Lafia City Stadium, Adamu Hassan’s brilliant header was the difference as Nasarawa United edged Kano Pillars by a lone goal.
Shooting Stars of Ibadan held El-Kanemi Warriors to a score draw at the Maiduguri Township Stadium. Babangida Ibrahim got the home side in front. It ended 1-1 with Shooting Stars getting the equalizer with the last kick of the game.
The game between Niger Tornadoes and FC Ifeanyiubah was not concluded again at the Confluence Stadium on Monday morning, after it was it called of in the 94 minute when the FC Ifeanyiubah players walked out on the pitch, protesting bad officiating after they receive and conceive 2 red cards and 2 goals in the space of 5 minute to give Niger Tornados a lead, earlier yesterday the game was halted due to heavy downpour with Osanga gaving the visitors the lead five minutes before the interval. FC Ifeanyiubah goalkeeper, Bamba  also saved a first half stoppage time penalty. 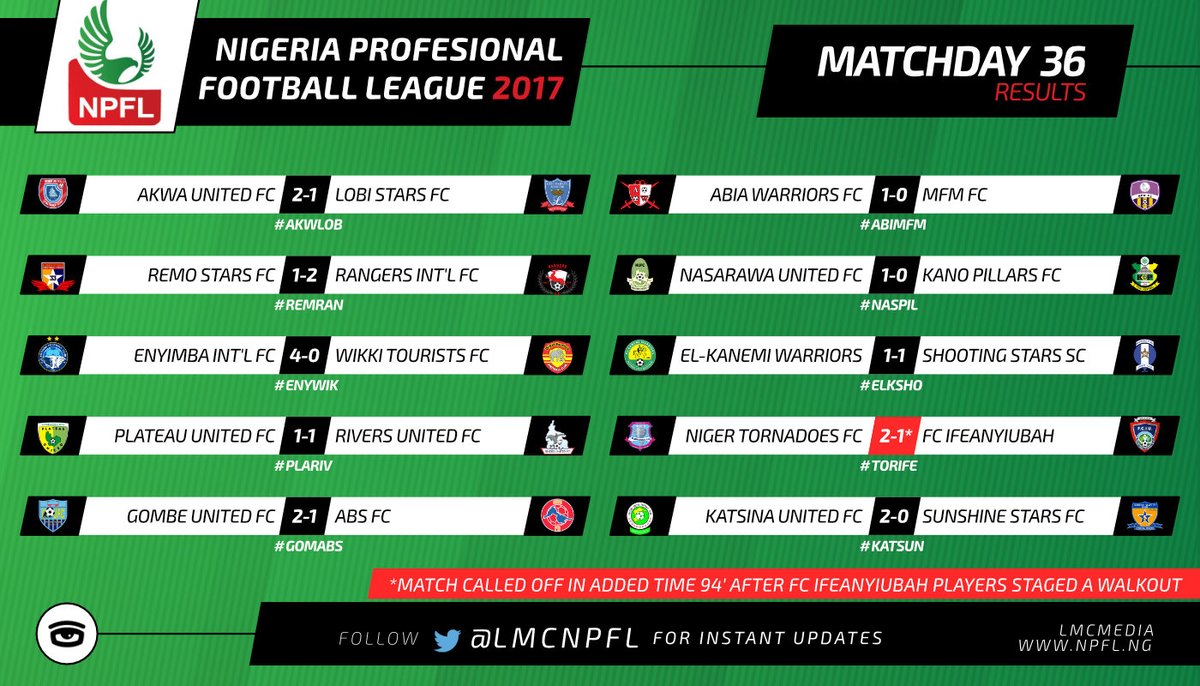 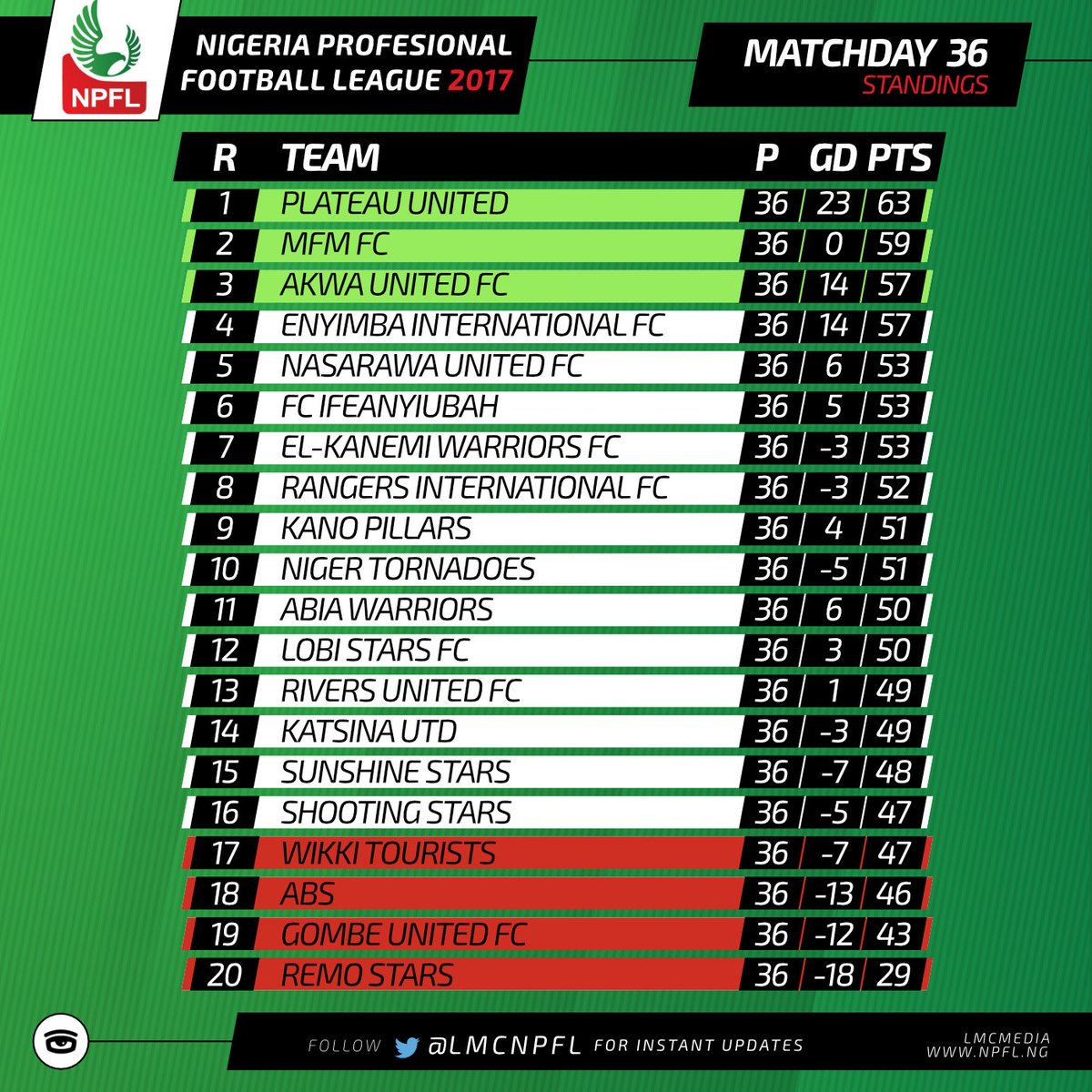