Leicester City vs Everton ended in another resounding 2-1 victory for the Foxes as they successfully replicated their dazzling Premier League form on Sunday evening, December 1.

Brendan Rodgers’ men toed into the game with their usual daring show of champions against tough Everton side but lost the chance to up a fabulous lead. Instead, the visitors quickly stole the show through Richarlison’s classical finish in the 23rd minute all thanks to Djibril Sidibe who produced a superb assist.

The game ran into the first half with Leicester trailing behind the resilient Blues who kept on giving the Foxes’ attack-line a huge headache.

Rodgers’ men got back into the game via James Vardy’s 86th-minute superb finish which balanced the score sheet for the hosts. 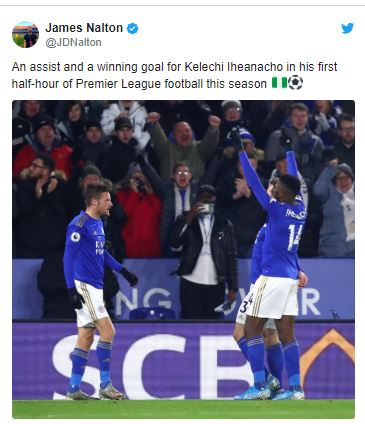 The England international increased his EPL tally to 12 after a thrilling assist from red-hot Super Eagles star Kelechi Iheanacho.

With the game looking destined for a stalemate, Iheanacho gave Ricardo Pereira’s pass a genuine tapping into the net of Everton in 94th minute.

The Nigerian star produced a moment of magic and scored his first Premier League goal in 25 games as Leicester extended their winning streak to six games. The epic comeback means the Foxes still maintain their second spot on the table behind league leader Liverpool. 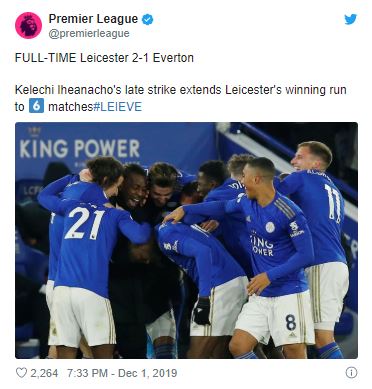